Despite the huge sums spent, little progress has been made on cancer.
The latter is characterized by the fact that an abnormal or damaged cell will replicate quickly in a sector of the organism and from there reach the rest of this organism, this is what is called metastasis. 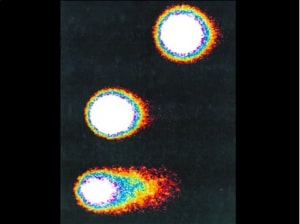 Unfortunately the organism which is programmed to detect or destroy these modified or mutant cells sometimes lets them escape, and isolated from the control networks, these cells thrive, unable to become mature entities and to function normally.
When the body is functioning normally and the immune system is in good condition, the internal repair system can detect and repair damaged DNA before the DNA cell replicates.
In the world we live in, eating a healthy diet and exercising regularly should give the body the energy and the weapons to reduce and even eliminate the risk of cancer. Unfortunately prevention is not a cure and while we can drastically reduce the risk we cannot eliminate it completely.
For this there is a growing need to develop tests which will allow researchers to determine more quickly and precisely what are the carcinogens and what their effects are on our body.
However, until very recently, scientists had not found a way to accurately determine which carcinogens posed a risk to humans.

This is why we are pleased to announce the participation of E.EXCEL laboratories in the development of a new technology that is revolutionizing research in cancerology and in many other fields.

It became evident that with the number of new products launched daily on the market, it was necessary to find a way to determine them in a rapid and conclusive way, their effects on DNA, the current means being imprecise because of the inability of some procedures to accurately identify mutagens and carcinogens. 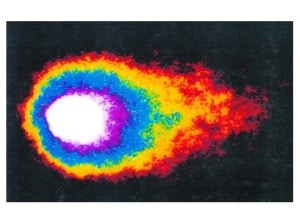 This new process, the Single Gel Assay -SSG- (Monocellulaire
Gel Technique) more commonly known as the Comet Assay, so named because of the comet-tail appearance of damaged DNA. It provides extremely precise information on the destruction of the DNA chain and its changes during repair. The Comet Assay can provide indications in 24 hours and in less than 10 days certainty not only on the fact that a product can be carcinogenic but on its degree of harmfulness.
When DNA is damaged by a carcinogen, the broken strands move away from the nucleus. If the cell does not repair itself, they drift out of the cell nucleus forming a comet tail with the heavier elements remaining towards the head, and the lightest towards the tail.
Tail length is relative to the number of broken strands in DNA. In . in other words, the longer the tail, the more strands of DNA there are in it, so the more serious the damage. This is called the tail "moment", it measures both the smallest detectable elements drifting, representing the length of the tail, and the number of broken pieces representing the amount of DNA present in that tail. The "moment" is the best method of analyzing DNA damage.
If we can measure the damage inflicted on DNA, we can also measure the speed of repair or the effects that certain products have on this repair, positively or negatively. For example, caffeine, which for a long time was suspected of having mutagenic or car 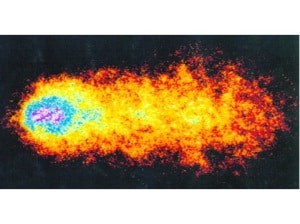 cinogenic effects, has consistently given inconclusive results in conventional analyzes. Using the Comet Assay, researchers were able to prove that although it had no destructive effects on DNA, it prevented DNA repair, was involved in the process of apoptosis, and therefore could cause cancer.

Apoptosis is a mechanism by which the body will "kill" a cell too damaged for it to be able to repair itself. The DNA strands of this cell will be collected and used by neighboring cells. The problems start when a cell loses this ability, and continues to replicate, spreading mutant cells throughout the body. Scientists believe that this fact is the root cause of certain types of cancer. The Comet Assay can also provide precise information about the process of apoptosis, as it can detect apopoptic cells earlier than other methods and at an earlier stage. The Comet Assay has thus become an important tool in research on this phenomenon.

The Comet Assay finds its use in a number of fields, whether in toxicology, biology or medicine. It is recognized as one of the most promising techniques in the mutagenic determination of certain substances because of its ease of use and its precision.

One of the important differences of the Comet Assay is the possibility of using healthy human cells in research. Other systems use cancer cells to see if there is DNA destruction or repair. The Comet Assay can test normal cells to determine an individual's ability to repair and their likelihood of developing cancer in their lifetime. The other methods are based on the exclusive use of animal or bacterial tissues to test DNA damage, which has generated much controversy.
The Comet Assay is the first to test for mutagens using normal human cells.

The scope of the Comet Assay is much wider than what this quick article shows, and it is only limited by the imagination of researchers. It is certain that in the near future this method of analysis will be used in a number of fields which it is very difficult to foresee at the present time.

We use cookies on our website to give you the most relevant experience by remembering your preferences and repeat visits. By clicking “Accept”, you consent to the use of ALL the cookies.
Cookie settingsACCEPT
Manage consent

This website uses cookies to improve your experience while you navigate through the website. Out of these, the cookies that are categorized as necessary are stored on your browser as they are essential for the working of basic functionalities of the website. We also use third-party cookies that help us analyze and understand how you use this website. These cookies will be stored in your browser only with your consent. You also have the option to opt-out of these cookies. But opting out of some of these cookies may affect your browsing experience.
SAVE & ACCEPT